“Let’s get ready to rumble” was the title of an Ant & Dec ‘hit’ single in 1994, but is also a suitable thing to shout before beginning an action packed game of Rumbleslam by those rather clever chaps at TT Combat.

Wrestling, despite being a ridiculously impressive visual spectacle has never really translated well into a tabletop game (or even a video game in my opinion)…until now that is.

Rumbleslam is really, really good and here is our rundown of the two player starter box.

What’s in the box?

Rumbleslam is set in a fantasy universe, where teams of wrestlers from all sorts of different races represent different casinos and grapple it out for fame and fortune in the ring. A team usually consists of five wrestlers, but you can add to a team by ‘buying’ extra fighters or ‘Superstars’ if you want to play a bigger and longer game.

Like many other tabletop miniatures games, there is a ‘points’ value that you build your teams to and this is the ‘dosh’ amount. Before a game is played you choose a ‘Dosh’ limit for each team (e.g. 1 million, 1.5 million, etc) and you can buy dice re-rolls for 25k if you have any spare dosh left over after buying your wrestlers. This starter set includes two opposing teams (human types vs greenskins) that are very well balanced against each other with dosh values of 1 million and 975k respectively.

The teams are usually a blend of one big fighter, two ‘normal’ sized and two smaller dudes (or dudettes). For example, in the starter set for the human(ish) team you get an ogre, two humans and two halflings. The greenskins consists of a troll, two orcs and two goblins. The fighters also generally have a description of grappler (better at actually wrestling) or brawler (hitting, punching and smashing).

The main aim of the game is to throw your opponents over the top of the ropes, like a good old fashioned 1990s WWF Royal Rumble. If the game ends before a team has been completely thrown out then the team with the highest dosh value left in the ring wins.

Rumbleslam is frickin’ awesome to play.

A match is played over five rounds, and a round consists of each player activating a model in turn until all the models have been activated. Each model can move and then use action points to try and wreck an opponent. This can take the form of a brawl attack or a grappling move, or they can get real flashy and bounce off the ropes to perform a special move or even get onto the turnbuckle and attack from the air!

Every model, from the smallest of goblins to the largest of ogres can really dish out some damage if the dice are rolling kindly for you. A facedown between the mighty troll and the lowly halfling doesn’t always end up with the little guy being flung somewhere off the table…well, it more often than not ends up in a messed up halfling, but not always. The little guys can be vicious when they bounce off the ropes or take to the turnbuckle and can really soften up a bigger opponent, making them ripe for a grappler to pick them up and toss them over the ropes.

Games tend to go one of two ways; an all out mash up in the middle of the ring where a pile of knocked out wrestlers appears or a more cagey affair where individual models get picked off one by one. The confined space of the ring makes you have to think differently than when you play other tabletop games on larger playing areas, and timing, positioning and sometimes shielding is important if you want to avoid the all out ten man brawl.

Losing a couple of team members early on can really hurt your chances of winning as the momentum sits with the team with the numerical advantage, but it is possible to separate your remaining wrestlers and split the opposition across the ring and hope for some lucky dice rolls or a crowd-pleasing special move that quickly evens matter out.

Throughout, it is just a delight to play. As a game it doesn’t take itself too seriously and simply provides hour after hour of entertainment.

Anyone who is a fan of wrestling will love this game, and if you were a fan during the 1990s then you will love the Superstar models as they bear a very close resemblance to some of the old WWF superstars…Hulk Hogan is in there, so too is The British Bulldog as well as long standing icons such as The Undertaker. If you squint at the catalogue then you can also see Yoda and E Honda from Streetfighter II!

If you are a fan of rolling dice and killing the odd hour over a tabletop game then you’ll get a kick out of it. It helps to have a bit of an affection for wrestling but it is not crucial as the fun gameplay is what shines through.

It is also a great game for kids, and if you are looking to get into the hobby of painting and modelling as well as playing games then the sculpt on the miniatures are very forgiving and relatively easy to paint to a decent tabletop standard. The assembly is also straight forward with many models being in one piece and others just needing one or two bits glued together…use superglue, not plastic glue for these. Oh, one other tip…the bases usually have a thin blue backing paper on them. If your bases aren’t perfectly clear then peel off the paper before you stick the models on…I missed this first time around and just assumed that the models came on light blue bases!!

This is a genuine quality game from TT Combat that is a whole bunch of fun to play. The standard of the miniatures is absolutely top drawer; they are made out of a resin but a kind of premium firmer resin that I haven’t experienced before which makes them quite hardy. The sculpts are outstanding and not just in this starter set box but across the whole range of models that they have released so far and that is worthy of a mention also. 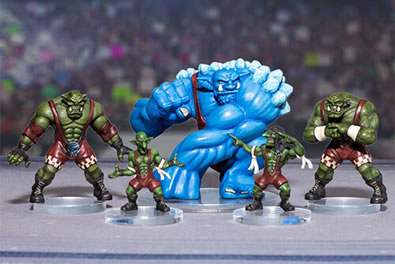 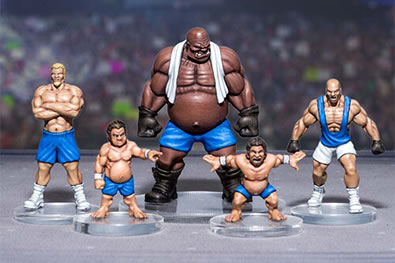 The output rate that TT Combat seem to manage is incredible and within weeks of the game going on general release in 2017 there were loads of other teams available and loads of superstar models, as well as an upgraded MDF wrestling ring, event only referee models, extra dice packs and tokens and much more. I have bought into quite a few extra sets of models and have not been let down in the slightest and if this is an example of how TT Combat manage a game release then it bodes very well for their forthcoming reboot of Carnevale (which we backed on Kickstarter).

Up until Rumbleslam I had always viewed TT Combat as those guys that just made excellent affordable MDF scenery, but my opinion has changed – they are a serious games publisher now and Rumbleslam feels like it was their call to arms. As well as Carnevale they have also acquired ownership of Dropfleet Commander and Dropzone Commander after Hawk Wargames had to close their doors and their momentum is gathering and they are putting budget and effort into all of these releases…for example, I was delighted to find out that the fulfilment of the Carnevale Kickstarter campaign was going to be delayed, because they have hired Gav Thorpe to write the background for the game!! If there is going to be a delay then I can’t think of a better reason than that!

Anyway, enough TT Combat fanboy scribing…and back to the game. Rumbleslam is fast paced, exciting and full of tactics, positioning and strategy all mixed up with plenty of actual pounding combat and brutality.

Scores 10 out of 12 with a +1 modifier for the epic range of extra models and accessories!

The Walking Dead (All Out War) Game Review by Mantic